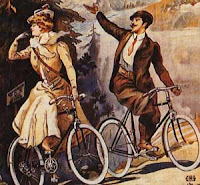 Many people are put off cycling to work with the fear that they will arrive at work soaked in sweat.   If we consider that cycling is roughly twice as efficient as walking, meaning that you can cycle twice the distance for the same amount of effort expended as walking,  sweating really shouldn’t be a problem just  as long as you maintain a comfortable speed.
So, slow cycling is the way to go, and the good news is that going slow enough to avoid excessive sweating isn’t really that slow.  Using the same effort as you would to walk will propel you along at respectable speeds of between 10 and 15 mph!  The temptation to go faster, even just which little bit faster, must be avoided if you want to stay dry.  The reason for this is that the effort required to cycle faster increases at a disproportional rate due to the effect of aerodynamic drag.  A 25% increase in speed from 15mph to 20mph will require you to roughly double the effort required to overcome the increased effect of drag.   Slow Cycling is smart cycling and guess what, there's a whole movement dedicated to the cause.