In 2005 I decided on a whim, to embark on my first ever solo long distance cycle tour, it would take me from my home in Reading to Tavistock in West Devon, a distance of some 210 miles to be completed over 3 days.  I planned to follow the National Cycle Network wherever possible and purchased the appropriate maps from Sustrans.  How naïve I was… the maps were useless, the route markings even worse and having wasted so much time and energy getting lost, I was forced to abandon the tour at Yeovil.
Without wanting to be over critical of Sustrans, it appeared to me that whilst Sustrans routes worked at a local level in terms of recreational riding and short distance commuting, the concept of a National Cycle Network was not yet a reality for distance touring. 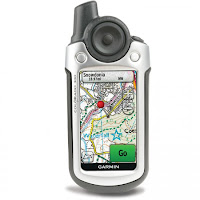 A years or so later during a visit to a local outdoor store I found myself easy prey to an enthusiastic rep from the GPS manufacturer Garmin.  I left the store having parted with more cash than I had even spent even on a bike, for a gadget, and one that oddly resembled an oversized old mobile phone.   The gadget was in fact a Garmin Colorado outdoor GPS receiver, which has proved to be, without exaggeration, the best cycle related investment that I have ever made.   Used in conjunction with cycle specific digital maps, it makes cycle journey planning and navigation along cycle routes, tracks and quiet roads an absolute dream.   I have since cycled 1000s of miles with the Garmin, never got lost and always made it to the destination.
It is worth acknowledging at this point that most smart phones now have GPS functionality and can be used in conjunction with cycle specific apps to achieve a similar capability, but beware of limited battery life and the ability of a smart phone to withstand the often extreme environmental conditions of cycle touring.
I will take some time to explain how to get the best out of cycle route planning using GPS in future posts.  Garmin Colorado 300 Handheld GPS System from Amazon