A Trip to the Airport

Gatwick Airport might seem like an unusual destination for a bike ride especially when you're not flying anywhere, but this occasion was to see my mother-in-law safely dispatched on a flight to Australia.  Her transit to the airport was more conventional, by car with Alice, stopping off for a visit to Wisley Gardens.  It was the garden visit that prompted Alice to suggest that I might like to spend the day cycling instead, if only all choices in life were this easy.

The first part of the trip followed NCN 4 through Maidenhead and onto Windsor crossing the Thames at Bray. 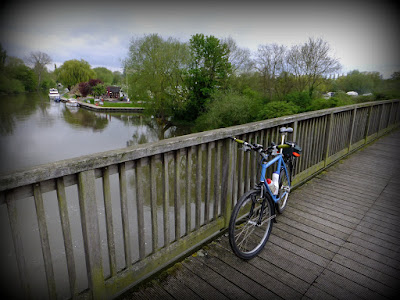 I followed the route past Dorney Lake Park and Eaton Wick, Windsor Castle appearing in view as I approached from the West.


I took a short break in Windsor before heading South on NCN 4 through Windsor Great Park catching a glimpse of this young stag.

It had been another fascinating ride and another example of how even the most mundane of destinations, with some careful route planning, can create some great cycle touring opportunities!

Email ThisBlogThis!Share to TwitterShare to FacebookShare to Pinterest
Labels: Touring