I came across this bag whilst look for something suitable for an upcoming 5 day tour. It was the first time I'd heard of the brand LOMO, it transpires they are a Glaswegian company who specialise in clothing and equipment for watersports. The first surprise is that this bag retails for just £29.99, less than a third of the smaller Ortileb Trunk Bag! Secondly, despite weighing in at only ~650g including fixings, the 15L LOMO has taken all of my kit for the ride including a full set of civvies, spare tubes and tools with ease. 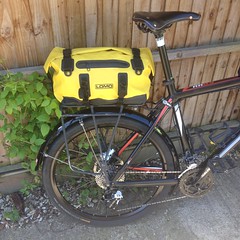 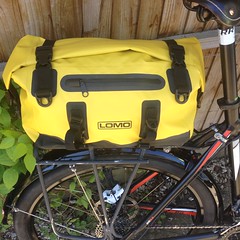 I particularly like the method of attaching to the rack which utilises 2 Velcro webbing straps that attach to the rack independently of the bag which is then fastened to the straps with quick release fasteners attached to the bag, this allows the bag to easily and quickly removed from the rack.

There's a nice video on the website that shows how it all works. https://www.ewetsuits.com/acatalog/dry-bike-tail-bag.html

My photos show the bag fitted to a Tortec expedition rack which matches the footprint of the bag perfectly. Workmanship and quality appear to be very good and I have no doubt at all that the main compartment is 100% waterproof.

I am really impressed, the LOMO has the potential to be the do it all bag for commuter, audaxer, tourer and bikepacker alike.
Posted by Unknown 6 comments:

If you're thinking about buying a full carbon road bike and all the gear to go with it in pursuit of cycling pleasure, then read this book first. It'll save you a whole load of cash, pain and disappointment whilst showing you how to really enjoy cycling as a recreational pursuit. I've been cycling just about as long as the author has and have independently come to many of the same conclusions explained in this book. So save yourself 40+ years of trying to get it right and learn how much enjoyment there can be in not pretending to be like a road racing pro. The author Grant Petersen is a bicycle designer and the founder of Rivendell Bicycle Works. He was U.S. marketing director for Bridgestone Cycle (U.S.A.), Inc. during the 1980s and 1990s, where he designed the XO series of bicycles.
Posted by Unknown No comments:

A Ride for Zeke!


A ride across London with Alice spelling out the name of our Grandson Zeke. Thanks to all our friends and colleagues for donating to CLIC Sargent who have been such a support to Zeke and family since his recent diagnosis.

So the bike wasn't submerged for long, maybe less than a minute but long enough to potentially write off some of the less obviously waterproof components.

Earlier this year I managed to ride my bike into the River Kennett, it was an unplanned episode on a narrow section of the shared footpath just outside Reading town centre. It was an accident and I’m not looking to blame the other cyclist, lack of decent cycle infrastructure or even Reading City Council. Even at the time it was pretty hilarious, both bike and I were submerged for only a second or two, I wasn’t hurt and was able to continue the journey home with only a few strange looks from people witnessing a very wet cyclist on a warm summer’s day. But the incident has given me time to reflect on how the chances of rider and bike surviving the perils of the daily commute can be improved; so, this will be the theme for some future posts.  In the meantime and in the absence of a youtube video which would be significantly more entertaining, see if you can spot the amphibious segment on Strava?

I stumbled across this series of podcasts this week and can't believe that I hadn't heard about it before now, it's been broadcast since 2004 and is a really well conceived show with extremely broad appeal!  Resonance 104.4fm's weekly radio show and podcast is presented by Jack Thurston  and continues to cover and uncover the intersections of cycling, culture, society and creativity. From Tour de France to roller-racing, from Brompton commuters to bicycle messengers, from Kraftwerk to hip hop, from urban design to countryside trips. Literature, history, travel, art, music, sport in a weekly half-hour show.

Email ThisBlogThis!Share to TwitterShare to FacebookShare to Pinterest
Labels: In the News

It was privilege to be part of this ride, which historically was Britain's first ever 600k event held in 1976 allowing British riders to qualify for entry into the legendary Paris-Brest-Paris 1200k,event.
The route had been modified from the original to avoid main roads that have now become too hazardous for cyclists. With controls placed at Eynsham, Chipping Campden, Belbroughton, Muxton, Chester, Upton Magna, and Chalgrove the route took in the very best of rural Berkshire, Oxfordshire, Cotswolds, Staffordshire, Worcestershire and Cheshire.
Although I've become reasonably comfortable in completing 300km rides, I purposefully avoiding any sort of training beyond 300km.  So it was a true adventure in the sense that as I set off from Windsor with the other 70 odd riders, I was not entirely certain if the outcome would be a success.
The outbound 300km to Chester was a blast, aware of all of the pitfalls that can scupper a long ride, I arrived at the control in reasonable shape.  At one point during the final run towards Chester I thought that maybe I was more tired than I felt when I shouted "frogs!" for the group to avoid a mass amphibious road crossing.  It was later confirmed that I wasn't hallucinating and that there was indeed a nocturnal frog road crossing activity.  However to later find this photograph of me asleep in the Chester control with other riders and a teddy bear does confirm the fact that night riding can be a very strange affair indeed.
After an hours sleep at Chester I ventured out in the early hours to press on to Upton Magna where the main "sleeping control" was based.  Like all the controls along the route Upton Magna was manned by a team of unpaid volunteers saints who cared for the riders every need.  Along with endless supplies of hot home made food there are also "hot" beds which are allocated with supreme efficiency with one rider in, one rider out, with a predetermined wake up call.  I still had time on the meter when I woke at early dawn to the strangely comforting chorus of snores, farts and general delirium of mad cyclists.

Getting back on the bike was not as nearly as painful as I'd expected, but exactly as I had expected it began to rain in biblical proportions.  My extravagance earlier in the year in buying the best in full waterproofs was now justified and I couldn't help feeling a hint of smugness sympathetic when I witnessed those who were experiencing the misery of the incredible abrasive properties of wet lycra on a wet leather saddle.

The final stages back to Windsor were a slog, but the rain stopped for long enough to pack the goretex away and the AUK gods took more pity and provided an astonishing tailwind up and over the Cotswolds into the familiar terrain of South Oxfordshire.  My back tyre had become prolapsed following a reckless descent on a rutted road and was the only thing that threatened to prevent me from finishing within the 40 hour time limit.  A fellow rider at Chalgrove, had given me his tyre repair boot in a typical act of selfless Audax generosity, but by now my arms felt they had lost the strength to effect any sort of repair, so I offered a quick prayer to Saint Vittoria and promised that I would forever buy her tyres, if only this one did not let me down.  And it didn't.

With sincere thanks to Keith Harrison and Sue Gatehouse for organising this ride, all of the "saints", all fellow riders and Audax UK

Sightseeing in London By Bike

62 Miles of great riding and sightseeing by bike.  Here are my pictures from the London Sightseer 100km Audax ride.

This unlikely looking gadget could be the future of Bike GPS Navigation. Hammerhead is used in conjunction with a Smartphone and displays turn information via a simple array of LEDs. The advantage this provides is that the smartphone can be stowed safely in the pocket with the screen turned off preserving battery life.  The unit is powered by a battery, chargeable through a micro USB port to provide around 20hrs operation between charges.  The Hammerhead also also doubles as a bike light for night visibility, incorporating a headlight and two side lights.

Hammerhead is a crowd funded project, to find out more and back this project visit https://www.dragoninnovation.com/projects/23-hammerhead

This story should not be overshadowed by Wiggo and the Tour of Britain. This is a tale of British ingenuity and cycling at its best... or should that be beast? Graeme Obree Sets Prone Cycling World Record 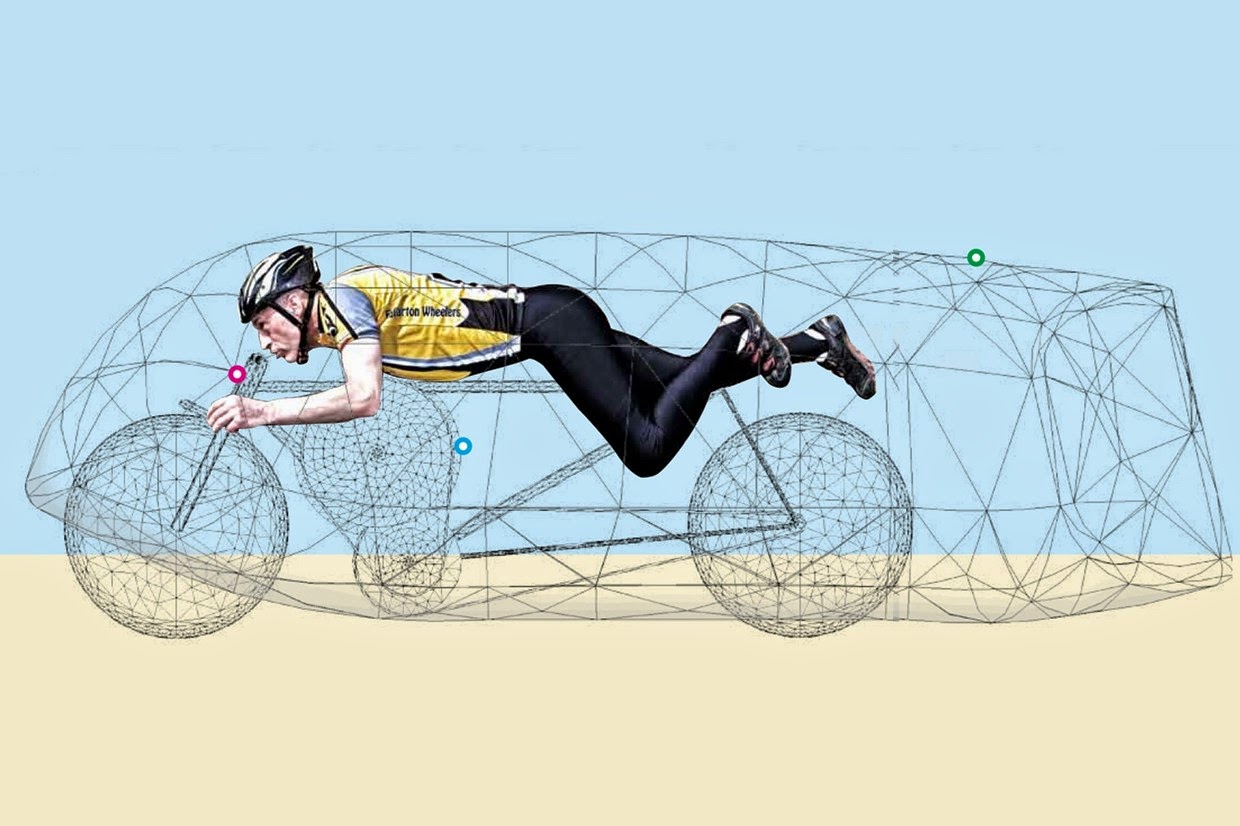