Sliding ever further down the slippery slope of audax riding the alarm clock was set to go off at 4:30 on Saturday morning. The “3 Down” was to be my first calendar 300km event and the 6am start meant that there was a reasonable chance that I might get back into that nice warm bed before Sunday. 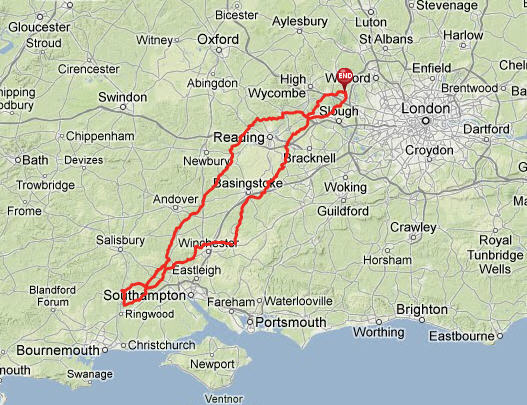 Last August I rode 300km for the first time and it took me over 21 hours, and it was reflecting on this ride that made me realise that a place in this year’s 1400km "London – Edinburgh – London" was really not for me. One of the things I find most rewarding about long distance cycling is arriving at the destination knowing that a journey that might normally be made by car or train or plane, was made by human effort alone. The problem I have with Audax rides is that the destination is ultimately the point at which you started and that it could be argued that the ride has no other purpose other than as a personal challenge. Although the satisfaction of completing a challenging ride is still there, you could argue what’s the point of doing a 300km ride purely for the challenge if you've already completed that distance before. I have to admit that a couple of weeks prior to the ride I nearly won this argument with myself but after taking a closer look at the route that traversed the Chilterns, Kennet Valley, Hampshire Downs, Test Valley and the New Forest, I changed my mind again and decided in favour of what promised to be a grand ride spurred on by the challenge of completing it in less than 20 hours.

This was my 4th calendar event and I was getting used to the pre-ride drill the night before of generally faffing about with the bike, double checking the gps and making up rations. I try and aim only to take essentials like tools, tubes and food but do find room for a few luxuries like my camera and mp3 player. The latter might surprise a few people but I do find listening to music or the radio through a single open earpiece to be completely safe and does help to get through those times when the weather or terrain conspire against you . It is also really useful in preventing a random and annoying song getting stuck in your head for hours on end... Lena Del Rey has a lot to answer for.

I headed off with the first riders at 6am on the 300km “long way home” with thoughts of reaching my destination just 30km from the start at Chalfont St Peter at some time before the early hours of Sunday morning. I had set the gps to display distance traveled rather than distance to destination, this way it is easy to check distance to the next control stage. Audax control points tend to be planned at 50 km intervals and this was true for the first control at Little Henry’s Café at Pangbourne.
I had learnt enough from my recent rides that although my pace tends to be steady rather than brisk it does mean that I don’t need to rest for too long at control points.
So it was a cappuccino to go at Little Henry’s, a quick feast on my own rations and onwards to the Test Valley and Kimbridge. I had intended to take a break at the 100km point but with the help of a modest tailwind pressed on to reach the control at Kimbridge at 120km. By now the temperature had warmed enough to restore the feeling in my feet and my progress had been brisk enough to allow a longer stay at the café, check the bike over and take on more food.
Leaving Kimbridge the halfway point at Fordingbridge was reached via a fast and spectacular ride across the New Forest. The control point was a far less spectacular but functional petrol station which in exchange for a purchase of a bottle of water provided me with the required receipt to provide proof of passage. Up until this point the ride could not have gone better, it had taken me around 7.5 hours to complete 150km, but the modest tailwind had been deceptive as I slogged it back across the New Forest into the now prevalent headwind.
Every ride of this length has its low points and the tiresome headwind was now compounded by an increasing need for the loo. This wouldn’t normally pose a problem, but I really needed a sit down and the New Forest, despite its name, lacked trees or any form of cover required for such an activity. Salvation and immense relief came 70km later at the control point of Arlesford in the form a well-appointed public loo with something of a shady past in that it had been associated with spying and rings. Thankfully it transpired that this was nothing to do with cottaging… the loo had been used during the cold war as a collection point for secret information by the Portland Soviet Spy Ring, fascinating stuff!
Leaving Arlesford a couple of pounds lighter, it was a brisk ride to the penultimate control at Winnersh in the company of a pair of tandem riders that I’d passed and been passed by throughout the ride. By the time I reached Winnersh I was on my own again for a final rest stop before the final stage back to Chalfont St Peters. By now it was dark and the many unlit roads required extra concentration, there were pot holes like moon craters everywhere, even around the swanky haunts of Gerrards Cross. Hopes of making it back to Chalfont by 10pm were dashed when I realised that the total distance was actually 308km, but the extra 8km added only a small amount of extra time as I reached the arrive at 10:30pm, delighted and frankly amazed that I’d somehow manage to “shave” 6 hours off my previous time over the same distance. With Brevet Card validated, I put the bike in the back of the car and negotiating the much trickier task of the 20 mile drive home. Happily it was still Saturday night when I walked through the front door and there was still time to round off the day over a bottle of wine with the lovely Alice!