It was only by the expressions on other peoples faces when I mentioned that I had entered an event called the "Willy Warmer", that the realisation that I'd slipped even further into the unquestioning and accepting underworld of distance cycling dawned on me. It was some time later that I learnt that "The Willy Warmer", a 200km Audax winter ride, got its double entendre of a name from its promoter the Willesden Cycling Club.
I have to say that I wasn't hugely disappointed when then the ride initially got cancelled following the first snowfall of the year. It's one thing to register online for a winter audax ride from the comfort of your armchair by the fire,large glass of port close at hand, to dragging yourself out of bed in the early hours of a Saturday morning in January and actually getting on your bike.
And so, when it was announced that the ride would be rescheduled for the following week with the option of a shorter ride in the form of a 120km "Brevet Populaire" I was enticed, even thought it did mean that I was about to sign up for "The Little Willy"! Even more enticing was that the arrivee for the ride would be "Halls Patisserie" in Chalfont St Peters with the promise of a tasty snack to start the day.  Halls did not disappoint and was able to summon up a noteworthy hot sausage bap at 7:30 on Saturday morning . However, eating a sausage bap in a tiny cafe in close proximity to a bunch of blokes wearing tights, some of whom that were clearly wearing three socks and about to do something called a willy warmer, is not an entirely conducive to a comfortable dining experience.
As there was clearly no plans for a mass start I set off alone in pursuit of the Little Willy.  The route had been well planned to avoid roads that might be affected by the winter weather and despite being largely on my home turf I found myself on many stretches that I'd not cycled before.  The first control was at the "Lou La Belle" cafe in Pangbourne which conspired against me by having changed its name, for sure there was a cafe named "Little Henrys" en-route in Pangbourne and full of cyclists but I never connected the two and left in a state of confusion looking for the elusive Lou La Belle.
The second control was at the far less evocatively named "Sainsburys" in Winnersh.  Again I failed to check-in to the control, but this time it more an act of defiance; the choice being a grim supermarket sandwich or a splendid English Breakfast at the Lockley Farm Coffee Shop at Arborfield.
By this time I was well and truly in familiar territory and how tempting was the fact that I was only 5 miles from home.  But to shorten the already little Willy would have been in excusable, so with a fair tailwind and some welcome winter sunshine I pressed on for the last 20 miles.  Apart from the splendid breakfast there were few new photo opportunities, but I did have to stop and snap this picture of the Castle Inn at Hurst noticing the old Cyclists Touring Club Winged Wheel on the facing wall. 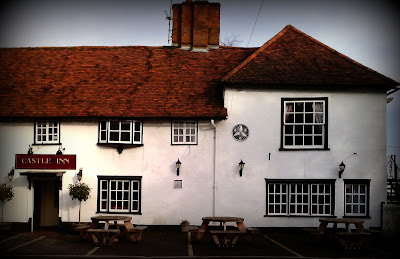 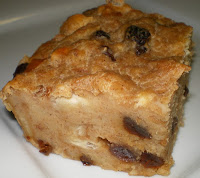 Arriving back at Halls Patisserie it seemed foolish not top off the days calories with another French delicacy that is a wedge of bread pudding.  This time I observed the rules and obtained proof of arriving at the control with a cashpoint receipt, though it remains to be seen whether my previous transgressions at controls shrivel my chances of being awarded the most coveted "Brevet de Petit Guillaume"!
Posted by Chris Bolton