The choice of off the peg traditional touring bikes in large frame sizes is extremely limited, even more so when the budget is under a £900; at 6ft6, I was looking for a frame size equivalent to a 24 inch traditional geometry frame. Comparing frame sizes on paper can be extremely confusing as there are some many variations in the way frames are sized giving rise to the use of “virtual” measurements for tube lengths and standover height. The Jamis Aurora frame is a rarity these days in that it has a horizontal top-tube which makes the assessment of frame size far easier. The largest frame available for the Aurora is 24.3 inches measured from the centre of the bottom bracket to the top of the seat tube, with a top tube length of 23.2 inches and a standover height of 34.5 inches this frames was about as perfect a fit that I was going to find in a mass produced machine.


Jamis is a brand that was previously unknown to me, of U.S origin it seems to have quite a history as a bicycle manufacturer dating back to the 70’s. Today Jamis bikes are sold exclusively in the U.K through Evans Cycles and at £699 in their summer sale the Aurora seemed well worth a punt! 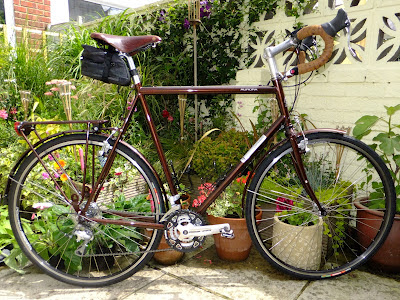 The Aurora is only available in one colour which is described as “walnut” which could be awful depending on which end of the walnut colour spectrum Jamis are describing. I was pleasantly surprised when seeing the bike for the first time to see that the “walnut” is in fact an understated metallic dark brown… which on reflection sounds even more unappealing than “walnut”, but hopefully you can see what I mean from the photos. Overall, the entire bike looks distinctly unremarkable, other that it reminds me of my bikes as a much younger man in the 70’s that had steel mudguards painted to match the colour of the frame; yes the mudguards are walnut too, as is the rack! It’s a question of taste for sure but I do like this look.
The TIG welding of the double butted Reynolds 520 frame is consistent and the tapered stays and sloping fork crown gives the frame a traditional and refined appearance. The forks are equipped with low-rider carrier braze ons and double eyelets on the fork and rear dropouts. The dropouts are forged as opposed to higher quality cast components but this is an area where costs can be kept down without majorly impacting performance or reliability. 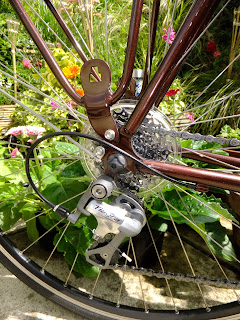 The drive train is a mixed affair with every major component coming from a different manufacturer or groupset SRAM 11-28 speed cassette, KMC Chain, microSHIFT bar end shifters, FSA Alpha Drive triple 48/36/26T chainset, Shimano Tiagra RD-4500GS rear and Sora FD-3403 front derailleurs. This whole arrangement works better than you might expect; the bar end shifters are a wise choice providing a more forgiving simplicity of operation over a more expensive STI option. The front shifter is a friction lever rather than indexed and allows easy trimming of the front derailleur to eliminate chain rub in any combination. However, the front gear change could be have been improved considerably if the front derailleur was a top pull, this would be consistent with the direction of the rear gear selection and would alleviate the appreciable effort required to overcome the spring resistance when selecting a higher gear by having to pull up on the lever. Update: I've since spotted that the cable to the front dérailleur was incorrectly routed under the spigot before the cable clamp rather than over it, reducing the mechanical advantage of the shift lever.  Correctly routing the cable has made a huge improvement, and I've found that there is an advantage to the mixed bottom and top pull dérailleurs in that double shifts are very slick and easy to perform. 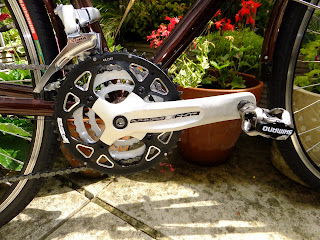 What did impress me however, was the inclusion of 175mm cranks as standard on the larger frame size as did the wider 440mm handlebars. The handlebar stem features a shim in place of traditional spacer stack that allows easy height adjustment of the bars by simply slackening the stem clamp and sliding the bars to the desired position. This is a bit of a gimmick, but one that works well enough and very useful when initially sizing the bike 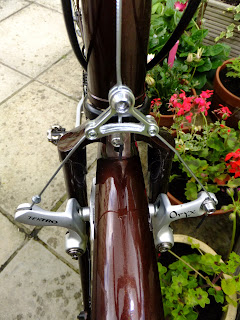 Braking is provided by Tektro Oryx cantilevers paired with Tektro RL340 aero brake levers. Despite the bike being checked prior to my collection by Evans, the setup of the brakes caused some alarm. Cable alignment was sloppy with both straddle cables needing adjustment, with one being routed over the cable retaining screws and one brake cartridge that had not been tightened. Minor faults perhaps, but ones that should not have escaped both factory and store.

The rear pannier rack is a sturdy and capable carrier with a maximum rated load of 18kg. The tapered design platform does make mounting a rack bag slightly problematic but does reduce any tendency for the rack to whip under load. I like the design and think it looks neat and quite stylish. 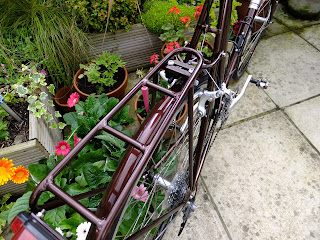 Ubiquitous on bikes of the price range are the budget Alex ACE19 rims; paired on the Aurora with Tiagra 4500 hubs laced with 14g spokes, the spoke tension appeared even and the overall build quality good. 700 x 32c Vittoria Randonneur tyres complete the wheelset which from my own experience are a superb choice for distance touring.

Although a bike is pretty useless without a saddle and pedals, I do wish that there was an option to buy a bike without them; to me it’s like having a stranger buying you a pair of shoes! The supplied saddle is a spongy affair that would be fine for occasional use over short distances; the pedals are rather good quality platform touring pedals complete with clips and straps. But I am forgetting that someone might be buying this bike who has yet to form a preference for such things, in which case both pedals and saddle are a good enough starting point.

Coming soon: How the Aurora performed on a 300km Audax ride
Posted by Chris Bolton