A Challenge for the Uncompetitive Cyclist - Part 2, Audax Past and Present

As an uncompetitive cyclist I have always liked the concept of Audax events in which participants attempt to cycle long distances within a pre-defined time limit. The origin of Audax can be traced back to Italy in the late 19th century where a group of riders completed the 200km journey from Rome to Naples within the 14 hours of a day between sunrise and sunset; considered by many to be an audacious feat, the riders became known as “les Audacieux” from which the present day term “Audax” is derived. 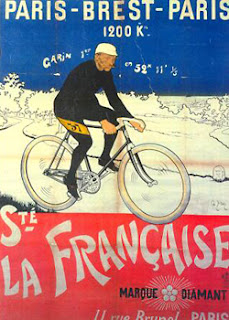 What could be simpler, pick a destination a day’s ride away, enjoy the ride and collect a title? Too simple for the French that’s for sure! In 1904, Henri Desgrange, founder of the Tour de France in the previous year, founded Audax France on the model of Audax Italiano. French l'administration and paperasse ensured that an abundance of rules and regulations were introduced that unsurprisingly gave rise to breakaway groups and rival factions.  It's a complex history, but in a nutshell Desrange wrote the rule book but then gave permission for L’Union Audax Club Parisien (ACP) to certify rides, the ACP then went away and changed the rules, introducing allure libre (free pace) events allowing riders to participate as individuals, without a "captain" and be free to stop for a nice cup of tea and a croissant!  All hugely entertaining and the sort of the thing that the French seem to thrive on and if anything served to enhance the popularity of these endurance rides in all of their forms.

During the 1950’s and beyond the British equivalent of Audax events consisted of the modestly understated “reliability trials”, regulated only by the Cyclists Touring Club, the concept of the rides were easy to understand and classified only by length and duration e.g. “50 in 4”. I took part in a “150 in 10” in the early eighties, no one had a map, there were no “control points” and we stopped for tea every hour. It was a bigger reliability test of the bladder than it was bike and rider and was ceratinly allure libre!

Unlikely that it might seem, and granted that it did take over 150 years to catch on; Britons eventually started to take up the challenge of French Audax rides. In 1966 Britain’s Barry Parslow became the first person to complete the 1200 km Paris-Brest-Paris ride… on a tricycle! I like to think that Barry spotted an opportunity to confound the French bureaucracy with his choice of machines, but he was probably just simply being British.

Nowadays Reliability Trials are rare and British interest in Audax riding at home and abroad is significant. The regulating body for Audax riding in the U.K. is the reservedly titled “Audax UK” (AUK) who use the Great Auk as its emblem. It’s an interesting choice of emblem for sure; particular when taking into account that the bird is now extinct and couldn’t even fly when it was around, or am I missing the irony here?

So in spite of all of the associated French faff, and after over 30 years of thinking it would be a good idea, I recently paid my dues and joined Audax UK. It was just after my 150 mile ride to Lincoln that I joined with the hope of getting that ride credited towards some award or another (there are lots of them), but it was at this point that I came up against my first experience of Audax paperasse.

Despite the answer of “Oui” in the Audax UK FAQ to the question of, “Can I be credited with events ridden before I joined AUK”, it took much debate between AUK officials before I was told “non”, because my event was what is known as a DIY by GPS, which for reasons that are far too tedious to go into here, cannot be credited retrospectively. Of course, it all makes sense when you know the rules and as every French civil servant knows, rules are there to be followed.

My first ride was a 100Km DIY by GPS to Gatwick Airport, and this time it was oui to my entry form, oui to my virtual brevet card and oui to my gps log and here’s the certificate to prove it, though I was really hoping it would be signed by a French civil servant. 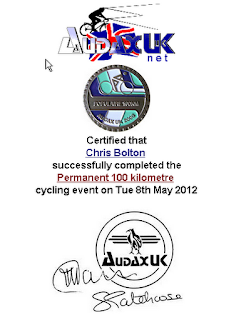 Next week it’s an ambitious 300km DIY by GPS to Tavistock and I look forward to spreading more entente cordiale as I cross the newly opened Gem Bridge at Grenofen on NCN27 which was so generously funded with £600,000 of French Euros, vive la différence!
Posted by Chris Bolton