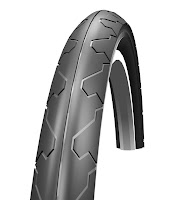 With a bewildering variety of bike tyres on the market, at prices that can rival premium car tyres here are my observations on some tyres that I have been riding on for the past couple of years that have proven their worth.

I fitted Schwalbe City Jets to an old mountain bike that I was preparing for the John O'Groats to Lands End ride that I completed last year.  The planned route was largely a combination of minor and green roads with some established off road tracks, so I felt that a semi-slick tyre would provide the best combination of rolling resistance and grip.  Although the City Jet is aimed at the urban commuter market they performed outstandingly throughout the 1000 mile ride on a wider variety of terrains than was planned .  Grip remained positive at all times even through torrential rain on city roads and the tyres remained puncture and damage free throughout the ride, despite bearing an all up load of some 120 kilos.  Wear was minimal and I would anticipate that a 2000-3000 mile life is a realistic expectation.  The City Jet is a budget priced tyre that would seem to match the much more expensive Marathon Plus in terms of puncture protection and unlike the Plus the City Jet is extremely easy to fit. Highly Recommended!